Every month, I cover a current or past project that Choice Cabinet is a part of. This month’s featured project is the Flats at East Bank Apartments. These apartments are in Cleveland’s beautiful waterfront district. I had the chance to tour a few units and check out the revitalized area.

In the mid-1980s, the Flats saw a new life. It became Cleveland’s premier destination for entertainment. Music venues along with many bars and restaurants began to flood the Flats area. By early 1990s, the Flats had the highest concentration of bars in the Midwest. But, after three drowning deaths in 2000, many patrons worried about safety. As people stopped visiting the Flats, many of the bars and restaurants closed.

Interest in the Flats renewed in 2005. A multi-phase redevelopment plan for the East Bank formed. The 2007 Recession and legal battles over land slowed the plan. By 2010, Phase 1 began to take shape. Phase 1 saw a 23-story office tower, an 8-story hotel, and many restaurants constructed. The Settlers Landing and Main Avenue RTA stations were also upgraded. Phase 2 is where construction of the Flats of the East Bank Apartments took place.

Along with several restaurants, the Flats at East Bank Apartments opened in 2015. The 8-story building houses 241 luxury apartments. The building comes with 20 different floor plans designed by Dimit Architects. The Flats at East Bank Apartments offers stunning views of the Cuyahoga River and Lake Erie. If you’re a sports fan, you’re a short Uber drive away from all the stadiums.

Choice Cabinet supplied a Euro-style cabinet with two finishes, white and brown. A Euro-style cabinet is a frameless construction. This means that there’s no face frame on the cabinet. Our cabinets also came with soft close hinges and drawer glides. These are perfect in preventing slammed doors and drawers. We used thermofoil technology for the finishes. Thermofoil uses vinyl like the siding for your house. It’s easy to clean and protects against chips. Against the brushed nickel features and granite countertops, these cabinets shine.

The Flats at East Bank Apartments offers luxury living with stunning views and amazing venues. Choice Cabinet is proud to have been a part of this project. With the 20 different floorplans, it was a challenging, but fun project. If you’re in the market for a luxury apartment, visit flatsateastbank.com

For more information about our Multi-Unit division, please click here. 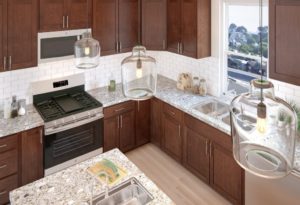 How to Design a Farmhouse Kitchen

No-Fail Tips for Designing a Beautiful Farmhouse Kitchen A farmhouse style kitchen blends numerous distinct styles: foremost of which are 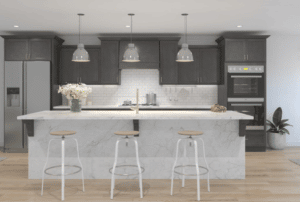 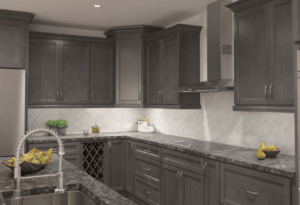 Pros and Cons of Particle Board for Kitchen Cabinets

Cabinet Material: Particle Board vs. Furniture-Grade Plywood, MDF, and Solid Wood   Beautiful cabinetry can make any kitchen look like