Renovating one of Cleveland’s Most Iconic Landmarks

Terminal Tower Residences is an ongoing project for Choice Cabinet. A few months ago, I had the opportunity to check out one of the model units. I also toured the floors currently under construction. The progress taking place is amazing. This week’s blog is focusing on one of Cleveland’s iconic landmarks and revitalizing efforts.

Budget for Your Remodeling Project

A SHORT HISTORY OF TERMINAL

A staple of the Cleveland skyline, construction broke ground in 1926. The original plans were for a 2-terminal, 14-story building. But ambition took over brothers Otis and Mantis Van Sweringen. The railroad barons expanded the number of terminals and the number of stories. Opening in 1930, Terminal Tower stands 52-stories high.

The Graham, Anderson, Probst & White architectural firm designed Terminal Tower. The Chicago-based firm found inspiration in the Beaux-Arts New York Municipal Building. Terminal Tower was the tallest building outside of New York City until the mid-1960s. The Prudential Center in Boston, Massachusetts would take that honor. It was also the tallest building in Ohio until 1991 when Key Tower finished construction.

Terminal Tower has also been a part of Hollywood. It’s been in the background for movies such as Major League, A Christmas Story, and The Avengers. The Drew Carey Show and Hot in Cleveland also featured the building in various scenes.

In 2016, the K&D Group purchased Terminal Tower from Forest City Realty Trust for $38.5 million. Their goal is to preserve the building’s historic elements while adding modern amenities. Partnering with Cleveland Construction, K&D Group is working to make the goal a reality.

The 297 units will occupy the fourth through fourteenth floors. Because of its unique layout, residents have 60 different styles to choose from. Residents will also find units ranging from 590 to 2,400 square feet of space. They’ll have the option between one- and two-bedroom apartments as well as penthouses. The first round of units became available in September. Construction on the remaining floors finishes in early 2020.

If you’re looking for an all-in-one apartment, Terminal Tower Residences could be the place for you. For out-of-town visitors, the Ritz-Carlton Cleveland and Renaissance Cleveland connect to the building. For entertainment, the Jack Casino and Tower City Center are within Terminal Tower. Tower City Center has shopping and dining as well as an 11-screen theater. For the sports fan, a walkway connects you to Rocket Mortgage Fieldhouse. You’re also within walking distance to Progressive Field and First Energy Stadium. Should you decide to take in a show or play, Playhouse Square is nearby as well. You can also stay in. The fifteen floor of Terminal Tower Residences is a community lounge. It includes a rooftop deck and bar.

For the residences, the K&D Group and Cleveland Construction went with an open concept layout. These spaces are perfect for entertaining and have a great flow. You’ll find the luxury is all over, but especially in the kitchen and bath. In the kitchen area, you’ll find stainless steel appliances and granite countertops. The bathrooms have the perfect spa-like touches. For the cabinets and vanities, the K&D Group chose Choice Cabinet.

The K&D Group wanted a cabinet that they know would stand a test of time. As residences move in and out, cabinetry can take a beating. Having worked with us on past projects, the K&D Group knew Choice Cabinet was a natural choice (no pun intended). We worked with them on the Residences of Halle. We were also a part of their Residences at Leader project. Our stock Choice Basics® Dakota cabinet was used for this project. K&D upgraded the cabinets and vanities with soft-close hinges and glides. These hinges and glides reduce accidental slamming which makes your neighbors happy. The gorgeous cherry stain gives the kitchen and bath a warm and cozy feel. K&D loved Dakota look so much that they’re using our remaining stock.

The rich history of the Terminal Tower would make it worthy to move in alone. When you add the added features and proximity to everything in Cleveland, it’s a no brainer. If you’re in the marketing for luxury living, take a look at Terminal Tower Residences. Find more information at terminaltower.com or call 833-608-6607. 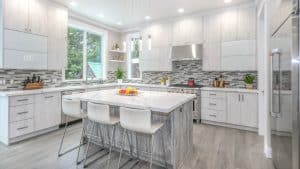 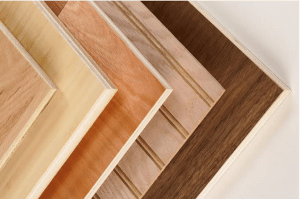 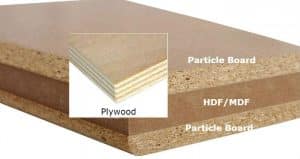